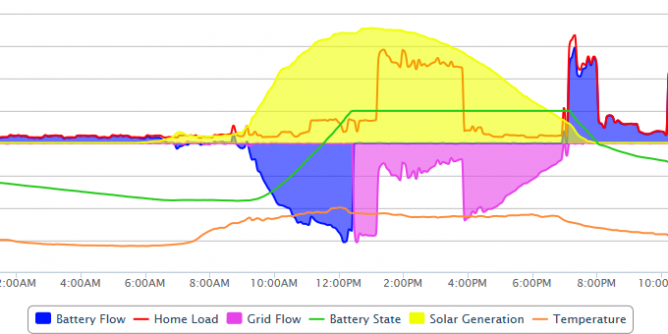 For those of you that have a solar and Tesla Powerwall 2, you will note that the mobile app is very good at showing you current state and data from the prior day. However, data at the week/month/year is summarised so you can no longer see the granular data. So, how do we capture this data until Tesla add this functionality?

I’ve been a user and contributor of PVOutput (http://pvoutput.org) since the very day my solar system was installed (https://www.teslastraya.com/?p=67). Via the Enphase integration it uploads 5 minute data and is able to create very neat charts and graphs across your generation and consumption. As a contributing user, you can also input your energy prices and it will calculate daily/weekly/monthly/yearly costs.

The integration with the Powerwall 2 API’s unfortunately isn’t as straight forward. I won’t go into the complete technical detail in this post (however if you want this detail comment below and I will look to create a blog post!). It involves ensuring the Powerwall 2 is connected to your home wireless network and running some scripts on an always on Raspberry Pi. This queries the web server in the Tesla Gateway. This data is uploaded to PVOutput and graphed in a similar manner to my Enphase system.

The graph above my look a little “busy” at first look so let me break it down:

Some interesting notes from this day:

You’ll note that there are some subtle differences to this graph then the one that came from the Powerwall 2’s:

If you haven’t seen my previous post about my solar and Powerwall 2 set up, please take a look at that post here